The DesignMakeTeach blog was pretty quiet this summer. You would be forgiven for thinking that it was because I was taking a leisurely summer break. Actually it was the opposite, all because of the personal professional development journey I started documenting on this blog over a year and a half ago. Writing about 3D printing and making in the classroom has led to some amazing opportunities.

This summer I taught 2 weeks of STEM camp, consulted on the launch of learn.printrbot.com, presented at the ISTE convention, was part of the Make Magazine 2015 3D Printer Shootout, and attended MakerCon and World Maker Faire NY with backstage access. I met some awesome educators and makers and have some great stories to tell. 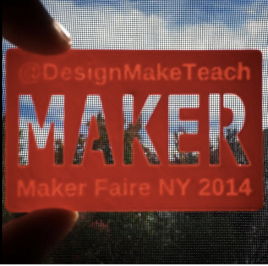 Here are the blog posts I’ve written for other sites that have kept me from spending as much time on DesignMakeTeach.com.

In November, I’m slated to have two articles in Make Magazine and a webinar on the Maker Movement for ISTE.

My Instagram feed is a great way to keep up with the projects I’m working on http://instagram.com/designmaketeach.