The flexy models are an exploration of the properties of PLA that allow it to bend small amounts without breaking. Designers can limit the bend angles and add multiple bend points creating a flexible design. I used Snake by Zomboe and Flexy Rex by zheng3 as inspiration. I created my models from scratch but used those designs as reference for key dimensions and understanding of the mechanic.

Flexy Washington Monument, was created in Illustrator as a 2D vector design and then dimensionalized using Tinkercad. I started by created a number of equally spaced 2mm high rectangles and then joining them with a 0.6 mm spine. I used the pathfinder tools to join the rectangles into a single flexy template object. I then took the outline of the Washington Monument and centered that on the flexy template and created a boolean intersection. The top did not look quite right with the cut outs so I returned the top to the original outline. I then saved the vector file as an SVG and imported into Tinkercad. 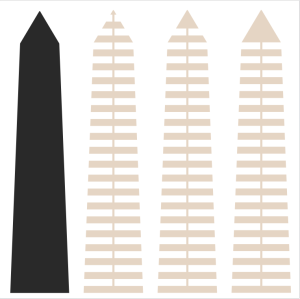 The thin version did not quite have the right profile. I went in and increased the thickness of the model.

Reference: Snake by Zomboe and Flexy Rex by zheng3